Our murals on each restaurant, tell a little of the history of LAMBERT’S and feature some of the people important to our business.

Your won’t have any trouble finding us–we got a BIG sign and we are definitely “The Only Home of Throwed Rolls.”
Our big front porch is a comfortable entry–inviting you in for a great time and plenty of down home good eatin’ food. We had to take this early in the morning so you could see our windows and benches. Any later in the day and you can’t see the windows for the people. 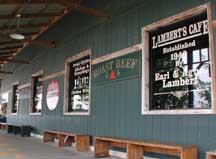 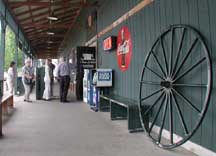 You know how you always hear, “it ain’t set in concrete?” Well, at Lambert’s the motto of Norman Lambert is so important, we DID set it in concrete. All you have to do is visit and you will see it’s true. 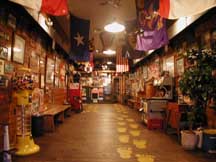 Once inside, in case there is any doubt as to where to go, just follow the big foot prints and you can’t go wrong. Of course we don’t want you to be in such a hurry to eat that you can’t enjoy some of the things we have collected. 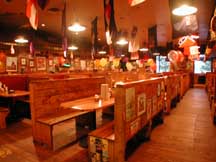 Take a minute and look around. Of course, once again, you’ll never see Lambert’s like this photo, so we thought we would let you see what is behind and under all those people. 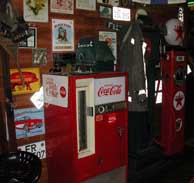 Period paraphernalia is thick at Lambert’s. There is plenty to look at before or after you eat and we are pretty proud of some of the things we have on display.

‘Course if you are of the right age, some of the things might bring a tear to your eye, remembering how it used to be.
You can even try your hand at “squeezing the bull’s horns” to test your physical strength. Will you make superman, merely macho or just be a pushover.

This stove, constructed by Scott Lambert, is made entirely of wood. It bears the name, “Joseph Scott Stove Co.” in honor of Scott’s son. Yes you could get a good hot fire going here, but it would only be for one time. The stove is on display at the Foley, Alabama restaurant, managed by Scott Lambert. 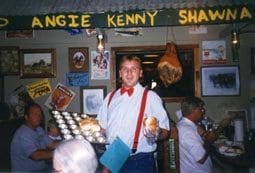 Scott is not too bad at throwing rolls either, although he usually leaves that privilege for those with very accurate throwing ability. LAMBERT’S is, of course, known for their Throwed Rolls, and everyone enjoys catching a roll or two. Some people, however, come a little over prepared to catch a roll.

Made from scratch and baked fresh all day, every day–hot rolls from LAMBERT’S are not only fun to catch, but delicious to eat. Spread some real butter on them or get adventurous and try some country sorghum molasses on them.

But, like we said, the real fun is catching a roll. Even more fun is watching other people catch them, or at least try to. Dozens of hot rolls are flying through the air every few minutes at LAMBERT’S, so be alert and have a roll.

Our chef salads come in a bread bowl made from the same dough as the “throwed rolls” — so eat the salad AND the bowl if you can handle it.

LAMBERT’S is also known for their “pass arounds” — onion fried potatoes, fried okra, macaroni & tomatoes, and black-eyed peas. These are brought around constantly and are free with any meal. But look out, you can get hooked on those fried potatoes.

When you finish eating and stop at the cashier, pick up a LAMBERT’S souvenir — large drink mugs, coffee mugs, sorghum, T-shirts or other item. 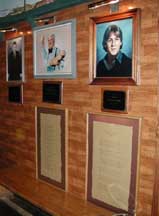 Pause a moment and look over the things on display. Our tribute wall gives recognition to important members of our family who are no longer with us — founder Earl Lambert, Norman Ray Lambert and Todd Lambert. “All are gone but never forgotten.”

Come visit us and have some fun and good food — we flat appreciate your business.